ilajakcom
13 May
Treatment in Turkey

Why are women more prone to cellulite?

Cellulite is a harmless skin condition causing lumpy, dimpled flesh on part of the body.

It is considered one of the most common types of obesity affecting women.

Cellulite usually affects areas rich in fat, particularly the hips, thighs, abdomen, and buttocks, and is more common in women than in men.

Cellulite is a skin condition, it is important to know about the different types of cellulite to find the most effective treatment.

Here are the three different types of cellulite:

Soft cellulite is mostly present in areas where there is a buildup of fat, such as upper arms and legs, and is often accompanied by varicose veins or spider veins.

It gives the skin an undulating appearance and, as its name implies, it is soft to the touch.

Also known as solid cellulite, this type is more common in younger women, and is mostly found around the hips and upper thighs.

One treatment that is thought to help is mesotherapy, which consists of injecting customized combinations of drugs, vitamins, and natural extracts into the mesoderm layer where they act on the problem under the surface.

This is the least common type of cellulite and also the most difficult to treat. It results from problems of poor circulation aggravated by significant fluid retention, it mainly occurs in the legs.

Edematous cellulite is closely associated with fluid retention and circulation problems, so it is important to treat both of these conditions; varicose veins may also occur and need to be dealt with. Gentle, non-impact exercise such as cycling, walking or swimming is recommended. 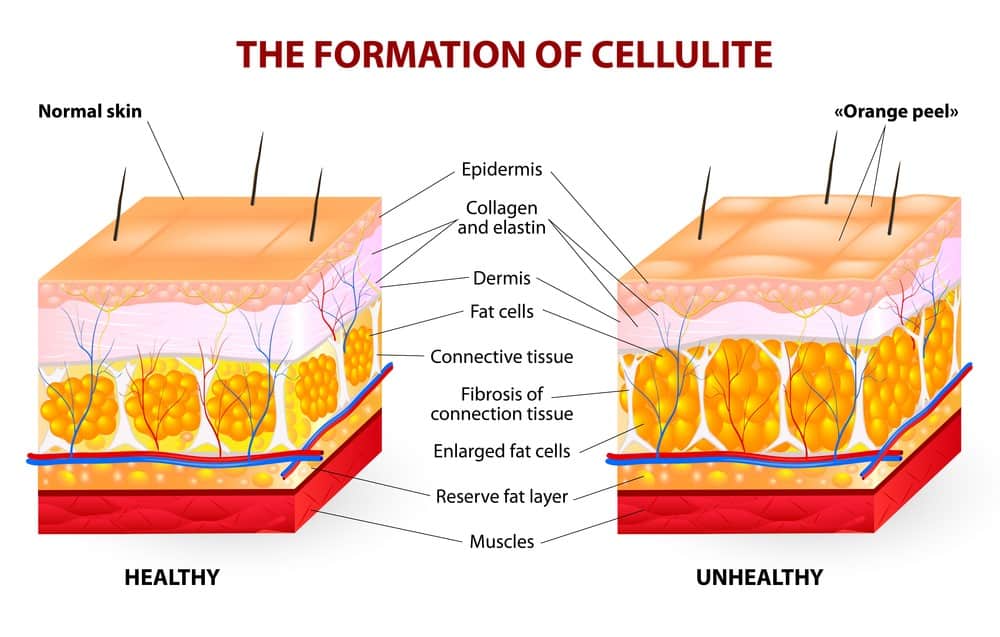 Cellulite is the dimpled-looking skin that resembles orange peel and affects up to 90% of women, the reason behind that is the war between thick collagen bands pulling down the skin and fat cells pushing the skin up.

Parts of the body most prone to cellulite

Cellulite affects areas of the body rich in fat, that is the hips, thighs, abdomen, and buttocks.

Cases of cellulite that appear on the leg area of the body and appear more clearly on the back of the thigh.

Cellulite very commonly affects the abdominal area, because the abdomen is the largest store of fat in the body. It can also appear as a result of pregnancy in women.

These are cases of cellulite that affect the hip area and the lower abdomen (buttocks) and can be eliminated by exercising in general and walking in particular.

Arms are one of the commonly affected body parts by cellulite, particularly the upper arms, with no clear cause behind it.

Cellulite occurs as a result of the accumulation of fat under the skin, and some women have a higher risk of infection than others, as the amount of cellulite that affects them and its clarity depends on factors such as genes, the fat percentage in the body and age. The thickness of the skin also affects the appearance of cellulite.

In terms of cellulite caused by changes in lipid distribution, hormones play a major role in causing it. Insulin and catecholamines play a key role in the breakdown and storage of lipids. Sex hormones (estrogen in particular because cellulite is more common in women), cortisone and thyroid hormones also play a role as a result of their effect on fat stores in the body.

A poor diet affects the formation of fat cells under the skin, and with gaining weight and the disruption of the mechanism caused by diets rich in fat, the chance of cellulite formation becomes greater.

In addition, lack of physical activity and an inactive lifestyle reduce fat burning and lead to an increase in its accumulation, allowing cellulite to appear.

An unhealthy lifestyle includes many practices that contribute to the harming body like unhealthy diet smoking drug abuse stress and so on.

The development of cellulite may require the presence of certain genes in the patient. Those who have these genes have a greater tendency to develop cellulite. These genetic factors are associated with the speed and pattern of a person's metabolism, subcutaneous lipid distribution, as well as sweat and circulatory levels. Genes may play a major role in the occurrence of cellulite.

Pregnancy contributes to developing cellulite or making it more noticeable in 2 ways,

1- Gaining weight
2- Due to the hormonal changes that occur during pregnancy.

Are women more prone to cellulite?

Cellulite affects women more than men, with a percentage of between 80 and 95 percent of women. The distribution of fat in women is clearer than in men, and the muscle mass is also less. The collagen fibers between the skin and the muscles separate the fats located under the skin into several layers, and cellulite becomes clearer as you age as your skin becomes thinner and loses its elasticity.

How to get rid of cellulite?

Below we shed some light on medical options for reducing cellulite:

The laser treatment is followed by massaging the tissues with a mixture of radio-infrared and laser beams applied to them. Heat and suction can also be added.

Cellulase technology may be used for treatment, and it is one of the laser techniques that break the tough fibers under the skin.

The improvement in the appearance of the skin appears after several sessions, and the results last for six months or more.

It is done by pressure waves which have a positive effect on fibrous septae and protrusion of fat.

Ultrasound therapy is a noninvasive procedure in which high-frequency sound waves are used to locate and eliminate fat cells in the abdomen and thigh.

Treatment results require two to three months to appear, and it is recommended that ultrasound therapy be accompanied by another type of cellulite treatment.

Cellfina technology is based on a procedure called subcision.

Subcision can also treat scars and wrinkles. The technology uses a device the size of a needle to treat the connective bands just under your skin.

Liposuction or fat grafting can be done to improve the appearance of cellulite in very selective patients.

Cellulite can be treated by applying a special massage technique that targets the subcutaneous fat. This method works by breaking up the subcutaneous fat in the cellulite areas. The masseur applied for treatment uses special methods that break up the grease that causes the appearance of cellulite.

Weight loss itself can reduce the appearance of cellulite. Common exercises and training include: walking. running.

ILAJAK Medical is present in the list of the best obesity treatment, weight loss, liposuction, and cellulite treatment service provider.

There is no scientific proof till now.

Yes, Collagen can improve the appearance of cellulite cause it strengthens the connective tissues.

Brushing can help get rid of dead skin cells and stimulate blood flow, but there is no scientific evidence that it reduces or eliminates cellulite.

Yes, cellulite can affect both men and women.

Yes, Genetics may play a big role in the development of cellulite.

Food that contains high levels of sugar, fat, and salts like Chips sodas baked goods and processed mixes, and meats.

Losing weight reduces the appearance of cellulite, but does not eliminate it.

ILAJAK Medical© | A passion for care