Stomach Botox has recently emerged as one of the procedures that provide a solution for the obesity ...

MRI is the most commonly used imaging technique to diagnose problems of the spine and accurately det...

These days open-heart surgery has become known as traditional heart surgery, due to the emergence of...

Here we review detailed information about the cases we treat in the pediatric orthopedics departments such as Kyphosis, Scoliosis, Clubfoot and Spina bifida.

It may also be caused by a congenital birth or postural as a result of a certain sitting position the person is used to, and this often happens in the teenage years Or secondary to Scheuermann disease that causes kyphosis.

In cases of congenital kyphosis, the patients often need surgery to treat it, but no treatments needed other than an exercise in the postural type, and in case of severe pain and severe curvature in Scheuermann’s disease surgery may be needed.

It is a lateral curvature of the spine, and it appears most often in teenagers and is more common in females.

Developmental Dysplasia of the hip (DDH)

It is a condition where the hip joint does not properly form in babies, which results in the instability of the head of the femur bone in its place in the pelvis, where it can either get out easily or be out of place at all.

It is a cartilage and bone degeneration occurs in the head of the femur, as a result of poor blood supply to the bones.

It is a problem that affects teens, in which the head of the femur bone slips from its own growth cartilage.

It is a congenital defect that appears in one out of every one thousand births, the affected foot appears bent and small in the size, and the palm of the foot points inward and downward.

It is a congenital defect in which vertebrae fail to close properly, and it is often discovered before birth. It may appear as a fluid-filled cyst in the lower back of the newborn, and the patient needs surgery to close the congenital defect, in addition to physical therapy and follow-up.

Ilajak medical provides you with the best medical and surgical services, in the most important pediatric orthopedic centers in Turkey through disease diagnosis, surgical and non-surgical treatment, rehabilitation and physical therapy for all problems related to children's bone including congenital or genetic problems. 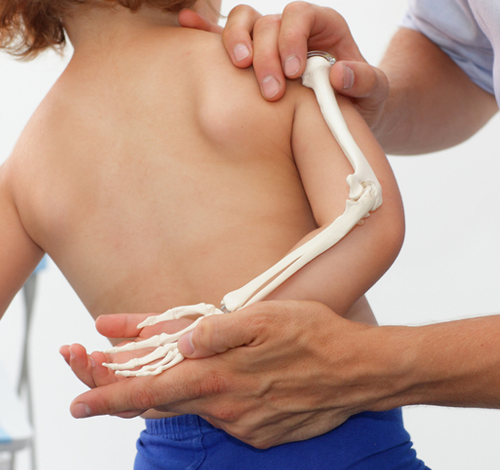 Do you have an inquiry? Contact us - For FREE Consultation.